My experience with AR and VR is extremely limited.  The closest I’ve come to virtual reality would be Second Life.  But it’s probably considered more of an immersive world than virtual reality.  Aside from that, the extent of my virtual reality experience is getting a free Google Cardboard viewer with my New York Times subscription a few years ago and downloading the NYT VR app.  It’s cool, but not something I’ve used often.

As far as my experience with augmented reality goes, well, that limited to:

So initially, I thought this entry was going to be a challenge.  But in a quiet moment, I posed a question to myself.  “What if you were required to teach a lesson using VR or AR even with your current level of knowledge and experience?”  The answer came back and the instructional implications were clear:  “Let the kids teach you.”

This would be a great opportunity to swap roles with my students and let them become the experts in areas that interest them and then have them present and demonstrate individual apps with suggestions for possible uses in our studies.

In such a lesson I’d present students with a lists where they could explore several VR/AR apps like the ones below.

Of course, we need to set some parameters for exploration, as in the embedded outline. 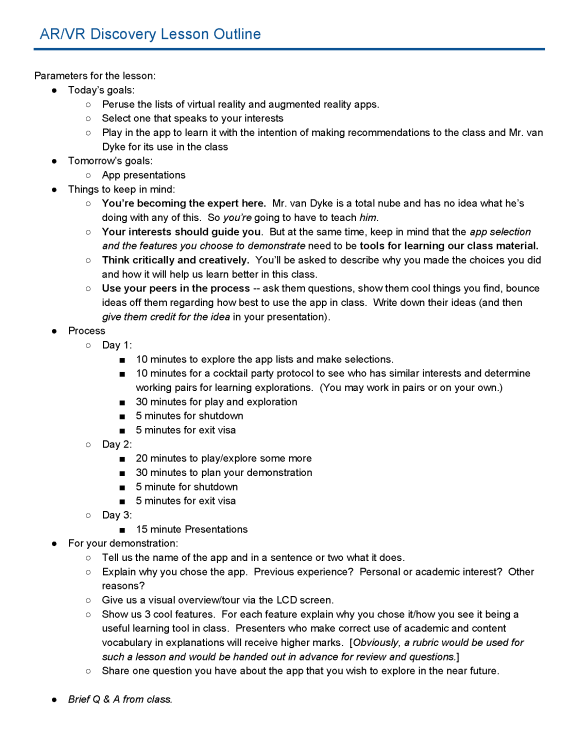 I’d then basically get out of their way and let them find their way through an app, learning as they go; while I monitor and help with any questions or issues that arise.

Both the punted lesson outlined here as well as many possible uses of AR/VR would align well with what we’ve been exploring all term.  The lesson is both taught through and is about digital media as learning tools.  The lesson explicitly incorporates self-directed learning through formal structures and in digital contexts.  The lesson outlined here makes use of the 4C’s — communication, collaboration, critical thinking and creating.  Students’ own interests are leveraged as are their previous learnings/schema likely will influencing their choices. Finally, the teacher is a guide on the side, creating the room and conditions for students to explore while putting students in the constructivist driver seat.  They will build knowledge to answer the analytical and evaluative question, “Which of these apps would make the best tools for teaching and learning our class content?”

As a result of the quick exploration I did to write this log entry, questions arose concerning the feasibility of using true VR in the K-12 classroom.  Nearly all the apps I saw made use of devices such as Oculus Rift, Samsung Galaxy Gear VR, or Google Cardboard.  Given the costs involved, this would, at the moment, seem to put VR out of reach of most K-12 schools.  Even Google Cardboard, at $8-$10 a pair quickly adds up.  (And I can hear the complaints now about having to hold the device to their face during the lesson for those who go the DIY route!)  I suppose finding videos as desktop or tablet options is a possibility.  But they don’t seem to be as abundant as the apps for dedicated VR devices.  I also wonder about school bandwidth issues with so many students in one room using data heavy video apps simultaneously.

In the end, perhaps such challenges are all just more opportunities to press on into the 21st Century.  Bandwidth issues or device issues at school?  Well then, flip that classroom.  Explore the VR landscape at home instead of in school.  Not everyone has a high speed internet connection or devices at home?  Well then divide classroom activities accordingly.  Let those who don’t have resources at home use those in class.  Flip for those students who do have home resources.  Break those spacetime limitation of the classroom that digital technology now allow us all to do!