This is going to be a difficult log entry since I don’t spend much time playing video games or in immersive worlds.  This is because I become too immersed and exhibit just a few addictive behaviors.  I knew I had to start being very careful one Christmas when I was staying with my parents for the holiday.  I had just purchased a Star Trek (of course!) starship builder game that allowed players to build custom or canon starships and then fly them on various missions.  One night, my parents and I sat in the den, them watching television, me building and flying starships.  I recall my mother giving me a kiss and going to bed.  I remember my father doing the same sometime later.  My next memory is my father coming back to the den, looking at me sitting in the exact same position he left me and saying, “Have you been playing all night?!”  I had indeed.

I remember feeling exhausted, knowing I should go to bed and get some sleep.  My eyes hurt from staring at the screen for hours and hours.  Throughout the night I knew, with every ship lost I should close my laptop and go to sleep.  Yet each time I went back to the builder module and thought, “Just one more.”  Then it became, “Just build it, but don’t fly it.”  As my father stood there laughing at me, but I was starting to wonder if there might be a problem here.

Over the years I have spent endless hours in SimCity — another particular favorite.  I got lost in Star Trek and Star Wars RPGs.  On iPad there’s a game that has taken far too much of my time, Galaxy on Fire (1 and 2).  For all of them, I have to monitor and limit my time very carefully.

All that said, I find Second Life far more manageable in regard to my time.  I was initially introduced to it by a dear friend in Australia who was getting a degree in medical informatics and discovered it when he was working on virtual meeting spaces for doctors to interact.  It came at a time when I had just finished reading several cyberpunk novels, and SL reminded me very much of the VR & AR worlds described in Neal Stephenson’s Snow Crash.  Aside from meeting my friend there on occasion I was and still am a total nube.  I find it a somewhat intimidating space.  I’m not comfortable interacting with strangers online and this world of avatars and Linden$ and objects that can be given and received can be overwhelming.  Not to mention my fears of somehow getting hacked.  So I mainly stick to myself and wonder and window shop in the different continents and parcels that interest me.

One place I spend a fair amount of time is Scilands — the science and technology continent.  And once NPR’s Science Friday started taking questions from Second Life, on occasion, I have listening from there.  Though I rarely interact with other individuals.  It’s fun from time to time.  However, I still find it a rather unnecessary additional layer for that particular listening experience.  So the media I watch or listen to in Second Life are things I happen upon in my wanderings, like NASA videos or information about colonizing Mars. 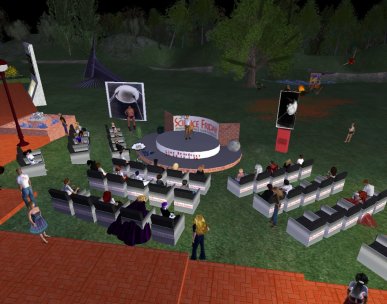 There is a lot of drek in Second Life and the interface is very cumbersome and rather unintuitive.  So those aspects definitely don’t “work” for me.  Although, I’m fascinated by the details of all the different worlds and seeing the things that others have clearly taken a lot of time to build.  That’s what keeps me coming back.  I think it’s interesting too that there are things that participants can buy that have value in the virtual context somewhat analogous to objects in the real world — clothes, real estate, private aircraft.  It’s enough that I actually think about purchasing Linden$ (especially when the exchange rate is favorable!).  It’s interesting too how it facilitates some sort of telepresence between people separated by long distances — as it did for my friend and me.  So it’s elements like these — analogues to the real world — that make it “work”.

least not at a very high level.  Though it would be an interesting exercise to try setting up a formal class in SL for a while to see what evolves.  However, I see at least one major element that could potentially keep Second Life and any other such platforms from reaching the level of community of inquiry.  That is the use of avatars as they primary means of interacting with others in the virtual environment.  Avatars in particular strike at a critical part of the CoI model — that of social presence.  Avatars in and of themselves are veils, masks that hide the true person behind them.  There’s always a level of wondering about how closely the avatar represents the actual person.  Trust, then, on some level, becomes an issue.  Since learning is impossible without trust between student and teacher, the social and teaching presences are disadvantaged.  The climate is infused with a certain level of dissembling if not dishonesty.  This would in turn, have to impact, in some way, on supportive discourse, climate setting which in turn impact cognitive presence.  If all the other elements of a CoI are compromised, then it almost doesn’t matter what the content is as there may only be a certain level of depth participants are willing to risk in their discourse, reflection, and construction of meaning.

Additionally, with our current level of VR technology, using it is less effective than using the technology we do have that make a virtual learning community/community of inquiry more cohesive, i.e: platforms such as D2L in combination with conferencing apps like Zoom, where participants can see and/or hear each other in real time.  The current platforms do better at lowering the obstacles of time, space, and distance for such educational endeavors as opposed to adding other layers that must be parsed in order to have meaningful interactions around the content.  Afterall, right now, it’s just easier to put Science Friday on the radio or stream the podcast than to sit at my computer, logon to a virtual platform, fly to the virtual studio in the virtual space, pipe the audio feed, and then send chat texts to digital avatars.